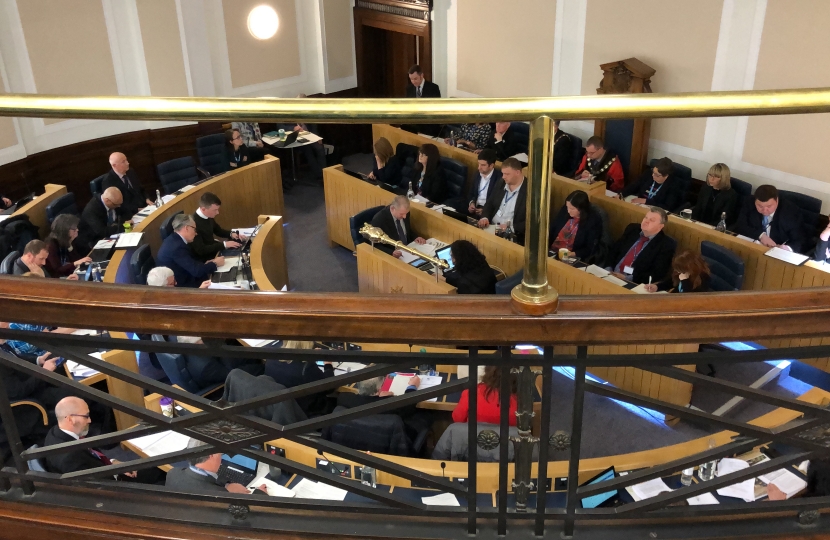 At the January 2021 Trafford Council meeting, Conservatives asked a question and brought an amendment to a Motion regarding Greater Manchester Police (GMP) entering the ‘engage’ phase of Her Majesty’s Inspectorate of Constabulary and Fire and Rescue Services formal monitoring process. Under the Labour Mayor of Greater Manchester, (who has overall responsibility for policing), the force failed to record 80,100 crimes in the year ending 30 June 2020, equating to one in five crimes in total across the period. The Inspectorate’s report also stated that one in four violent crimes went unrecorded.

A question was asked at the meeting to Cllr. Graham Whitham, Trafford Council’s Executive Member for Communities and Partnerships with responsibility for safer and stronger communities, who is also the council’s representative on the Greater Manchester Police, Fire and Crime Panel. The question asked if he would apologise to the residents of Trafford for not adequately questioning and scrutinising committee reports that he will have received and on meetings held, particularly since the Inspectorate had reported concerns since 2016 and should have been a focus of attention. The Executive Member failed to apologise despite the official Panel records showing that he attended only 2 out of the 6 Panel meetings that he was expected to attend.

The amendment to a Motion on the Inspectorate’s Report brought by the Conservative Group raised that the crime recording failure should have been corrected by the then Labour Police and Crime Commissioner and subsequently by the Labour Mayor of Greater Manchester and requested that that the Mayor does the right thing and resigns from his position having failed the residents of Greater Manchester and the victims of crime so badly. The Motion was voted down by Labour, Liberal Democrat and Green Members of the Council.

Commenting on the issue, Cllr. Dr. Karen Barclay, Shadow Executive Member at Trafford Council for Communities and Partnerships said “The failure by Greater Manchester Police to record crime properly is quite shocking and I am glad that the Home Secretary has been in contact with the Mayor to ask for a recovery plan and to offer him  additional Home Office support to remedy the issues identified in the Inspectorate report.

“What myself and residents in Trafford won’t be so pleased with however is the lack of support from Labour and other parties on Trafford Council in holding the Mayor to account for his dereliction of responsibility. It's clear that Labour, Liberal Democrat and Green councillors don't consider 80,000 unrecorded crimes, unsolved crimes and a broken crime recording system to be important.

“We have a Labour Executive Member on the council who can’t find the time to attend most police scrutiny meeting and a Labour Mayor of Greater Manchester who is keen to point the finger of blame elsewhere rather than acknowledge his own failure of leadership. The Mayor is now also telling Greater Manchester residents that he expects them to pay more through their Council Tax for his failing services. Trafford residents deserve better from than that.“

The Prime Minister's statement on the death of His Royal Highness The Prince Philip, Duke of Edinburgh