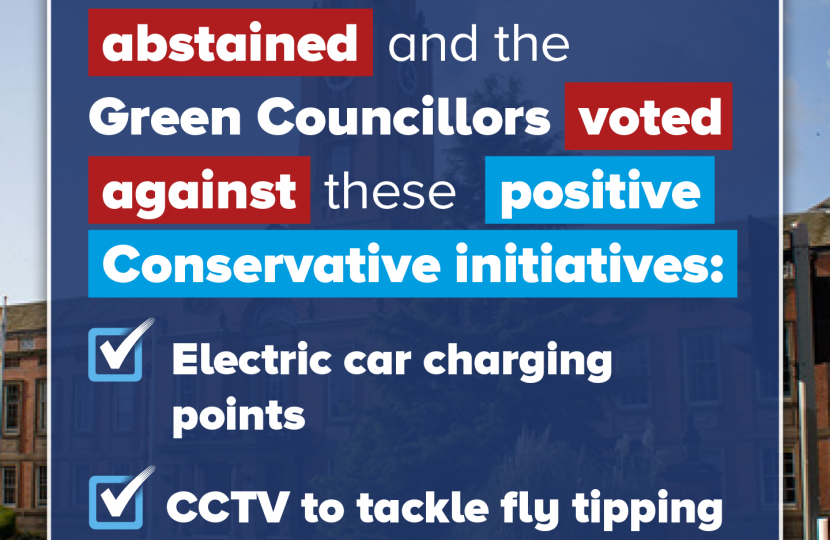 At the Trafford Council Budget meeting on 19th of February 2020, the Council supported two Conservative amendments to the Budget which will see the installation of 100, 50-kilowatt electric vehicle charging points and 14 new covert cameras to catch fly-tippers. The two proposals had been put to Council following Conservatives engaging with residents to ask them what was important to them.

With the Government having  announced that the sale of new petrol and diesel driven vehicles, as well as hybrid vehicles, will be banned from 2035, possibly 2032, research shows that the greatest barrier to people switching to all electric vehicles is the fear of running out of battery power and being stranded. A typical electric car takes 8 hours to charge from 7-kw home charging points. For many electric cars, drivers can add up to 100 miles of range in half an hour from 50-kilowatt rapid charger.

Last year, more than one million incidences of fly-tipping were dealt with by councils in England. The estimated cost of clearing up this waste was more than £60 million. Uncontrolled illegal waste disposal can be hazardous to the public, especially if it contains toxic material or asbestos. There could be a risk of damage to watercourses and soil quality from the dumped waste.

Catching and successfully prosecuting fly-tippers is difficult but CCTV evidence forms an important part of the legal process.  Installing CCTV in area prone to illegal tipping will act as a deterrent, improve the street scene and improve public safety.

Cllr. Patrick Myers, Shadow Executive Member at the Council for Finance and Investment who proposed the amendments said “Conservatives on the Council are delighted that these two important initiatives have been accepted by the Council. Having spoken with residents we know that those who already have an electric vehicle are concerned about the lack of availability of charging points in the borough, especially with the two points at Regent Road Car Park in Altrincham out of action. Other residents have told us that they don’t have the confidence yet to purchase an electric vehicle due to being concerned about not being able to get from A to B due to a lack of charging points. Our initiative will go some way to help to alleviate those concerns”

“Residents also tell us time-and-time again that they are frustrated with repeated fly-tipping on our roads and parks, while few are ever caught or charged for this serious criminal offence. The new cameras will go some way to deter those who are thinking of illegally dumping waste in our borough and will hopefully result in prosecutions too.”

“What is quite shocking however is that the Liberal Democrats and Green Party refused to support these two environmentally-friendly policies. Both of these parties shout loudly in the Council Chamber demanding action on climate change and then refuse to support two policies that would help to reduce carbon emissions and clean up our environment. It’s the Conservatives who are taking action locally and nationally to achieve the Net Zero target and residents shouldn’t be fooled by others who promise a lot and don’t deliver any of the change that is needed to improve our environment, health and well-being.”

Boris Johnson has written to all leaders of opposition parties to invite them to work together at this moment of national emergency.